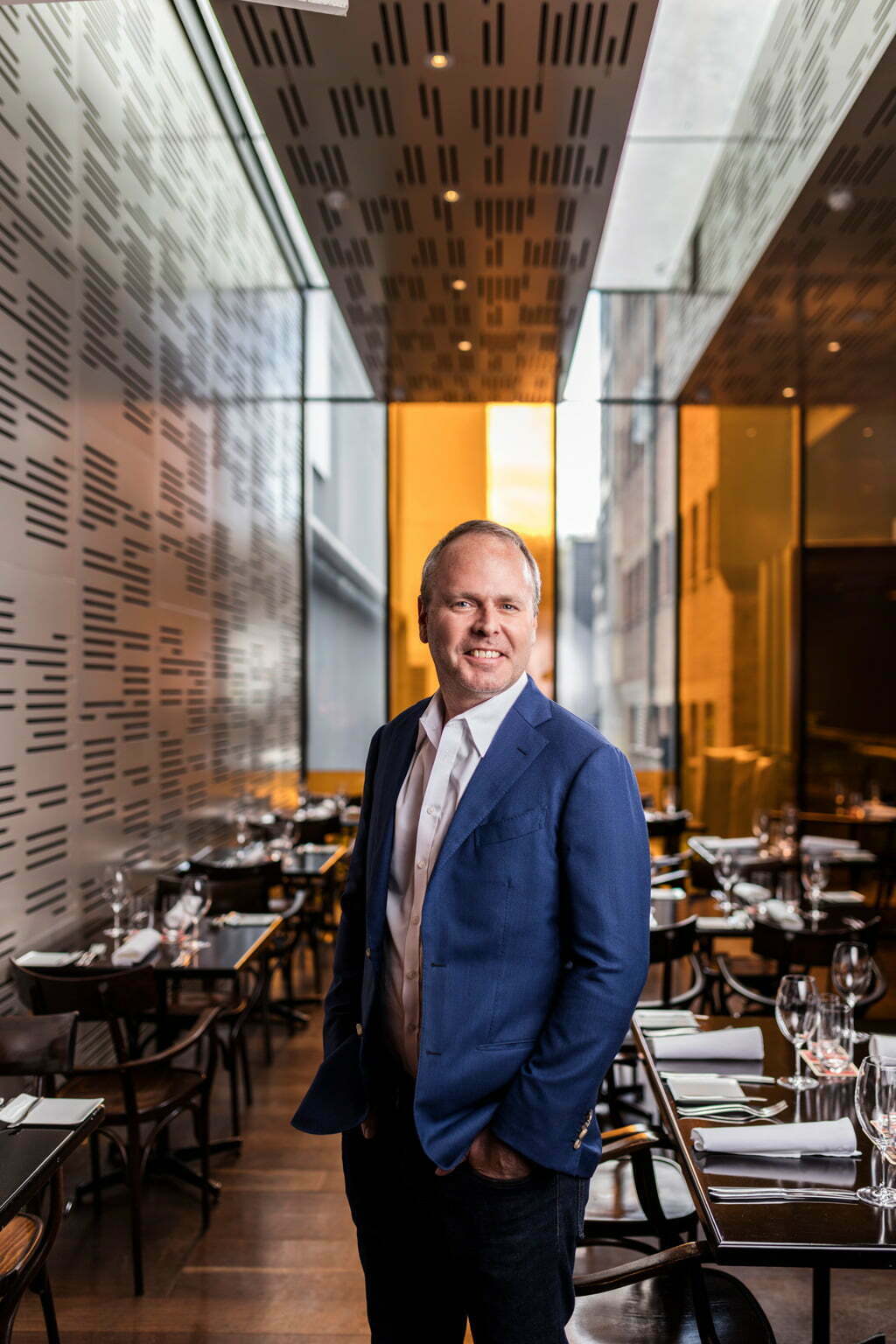 Andrew Buchanan has grown Urbane from a little Brisbane bistro to a destination fine dining establishment, and much, much more. By Kerryn Ramsey

“While studying economics at University of Queensland, I was spending so much time working in hospitality that it was like my second life. Over time I decided to defer my degree and take a job at Rae’s on Wategos in Byron Bay. This was the beginning of my second life being moved into first position.

“I worked at Rae’s on Wategos for five years and then, in 2000, I moved to Sydney for the Olympics and to work and have a bit of fun. Soon after that, an opportunity came to open my own restaurant in Brisbane. I grabbed that opportunity with both hands!

“I opened Urbane in Brisbane’s CBD in 2001. It started off as a small bistro with entrees for $12 and main courses for $20. We were only open for lunch and dinner. As time passed, we gradually improved the quality of our chefs and our food. By 2009, Urbane had transformed into a fine dining establishment. Back then in Brisbane, the pre-GFC, times were very good and everyone was having a good time.

“I think Urbane worked because we were just a small intimate restaurant that seated about 35 people. We were one of the first restaurants to offer degustation menus. Being an owner/operator, I worked lunch and dinner, six days a week, for all of those early years. I was the maître d’, the cleaner, the bookkeeper, the bartender, the waiter, the bookings receptionist—I did everything but cook the food.

“It’s vitally important to have a good team and a great environment where we all get on with each other. When we all willingly work together, that’s when the magic happens.”—Andrew Buchanan

“We also undertook a major renovation in 2009 where we were closed for six months, re-opening with Urbane and The Euro, and The Laneway cocktail bar. Then, five years ago, Alejandro Cancino joined me as a business partner and I think it’s fair to say that Brisbane had not seen a chef of his calibre. We work together very well—I look after everything front of house while he looks after the cooking and the kitchen. One of the key points of difference in Urbane—and now Euro—is that all dietary needs are catered. There are set menus for vegetarians, vegans, and for people with serious food allergies.

“At present, we employ about 30 full-time and casual staff. I believe it’s very important to create a safe and happy work environment where staff are offered appropriate training and the opportunity to learn. There is a lot going on in our business and many things for staff to undertake. We offer fine dining at Urbane and a more relaxed experience at Euro. We have our cocktail bar that also doubles as a function room and Sub-Urbane is our private dining room downstairs. It’s not uncommon for all these separate areas to be operating at once.

“This diversity of operations keeps it interesting for the staff. We train them up at Euro and then cross-train them at Urbane. They need a comprehensive understanding of the food, the wine and the service in all areas of the business. It’s vitally important to have a good team and a great environment where we all get on with each other. When we all willingly work together, that’s when the magic happens.

“The whole restaurant has evolved dramatically since it first opened and it’s still evolving. Alejandro and I travel as much as we can, both domestically and internationally. We try to eat out as often as possible during our trips just to see what other restaurants are doing. It doesn’t have to be a three-Michelin star restaurant for every meal—it’s amazing what influences you can pick up from all kinds of dining experiences. It creates all sorts of ideas in your head and a small bit of inspiration can transform and grow into a whole new idea that can be instituted in the long run.

“The biggest difference for me since first opening Urbane is that I now have a bit more balance in my life. Initially I was working long hours, six days a week, doing everything. Now, thanks to my management team, I look after the marketing and the events and I’m still there, working the floor, every lunchtime. However, if the need arose, I’d be more than willing to work six days a week again, opening up in the morning and locking up at night. I’ll do whatever the job requires.”

EP #19 – Working and Walking Together

From the Source
The clue is in the name of innovative South Australian company Edible Reconciliation. Formed by a dynamic Adelaide-based duo whose ...

From the Source
It’s a long way from Alabama to Adelaide but it was only the beginning of the journey for Angus Kiley ...

From the Source
No hassle, no chop, no peel, no mess! What's not to like about a smoothie made from healthy delicious real ...

Inspiration
Christopher Shannon, chef and owner of Jack & Knife Taking over an existing venue comes with some important benefits. However, ...

Inspiration
Diners at nel. can expect an ever-changing menu. Dining at the degustation-only restaurant, nel., is a unique, fun and surprising ...

Inspiration
Commissioned by Menulog, this research report looks at the lessons learned by the Australian food services industry during the pandemic, ...
Back to The Source